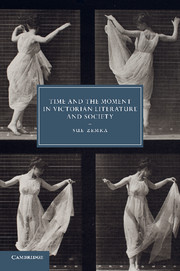 Chapter 1 - A brief history of the moment

Chapter 1 explores the concept of moments and momentary events in several areas of eighteenth- and nineteenth-century culture: association philosophy and psychology, literary criticism, melodrama, religion, and aesthetics. My main concern in this chapter is to trace a gap that emerges in the nineteenth century between embodied experience and abstract time.

Embodied experience was the testing ground for British epistemology and aesthetics throughout much of the eighteenth and nineteenth centuries. The temporality of physical and emotional sensations was central to the investigation of embodiment and the claims made on its behalf. In aesthetics, the embodied human subject was an organ of receptivity whose cultivation of pleasure and pain was sufficient in itself to the ends of art, and the success of an artwork depended on an artist’s manipulation of the temporal–sensory interface between his work and his audience. In general terms, this describes the cult of sensibility, a tradition that has roots in the eighteenth century, and continued to exert a diffuse influence in Victorian culture. Over the course of the nineteenth century, however, sensibility ceases to be adequate to a growing need to discover meaning (or verify its existence) in a technologically mediated reality that presents itself as rational and totalizing. Sociologists describe this period as one of rationalized institutions, and the aspect of this process that concerns me here is the rationalization of time. Abstract time, as we will see, becomes integral to the articulation of experience in the various fields of knowledge discussed here, such that events do not simply happen in time, but partake of time. Abstract time enters into the articulation of experience as a constitutive element, often in ways that imply that time gives us certain experiences.