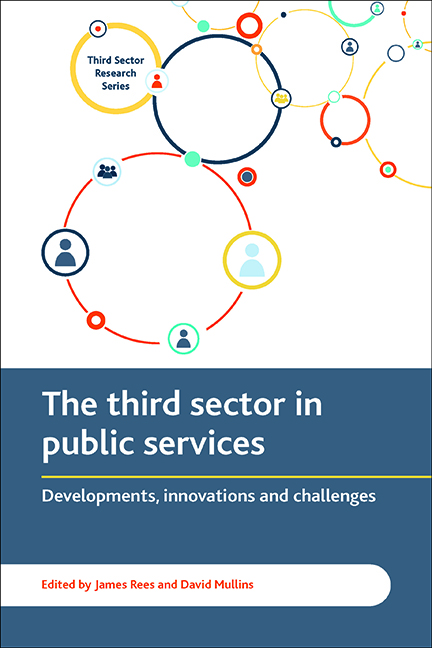 one - The third sector delivering public services: setting out the terrain

This book could not have been written a decade ago. From 1997 to the mid-2000s, the UK government strongly promoted the third sector in the delivery of public services, but it was too early to reach research-based judgements about the implications of its expanding role. As part of its wider efforts to ‘modernise’ public services, New Labour matched its rhetoric with a significant injection of resources designed to build and strengthen the relationship between the state and the third sector based on the Third Way idea of a ‘partnership’ (Kendall, 2000; Carmel and Harlock, 2008). In its turn, the Coalition government of 2010–15 promoted a vision of a ‘Big Society’, in which ‘civil society’ would play a stronger role in both service delivery and wider civic life, albeit in a context of austerity in public finances. The Conservative government elected in 2015 appears less receptive, suggesting a potentially more troubling future for the sector. An earlier generation of books reflected the relatively more marginal role the sector then had, but also presciently highlighted the pressures and dilemmas that have faced the sector as its role has grown (see Davis Smith et al, 1995; Harris and Rochester, 2001). Reflecting on this tumultuous 18-year period (1997–2015), the book aims to provide a broad overview of the emerging implications of the third sector's delivery of public services, informed by research conducted at the Third Sector Research Centre (TSRC). The book focuses on England, reflecting the centre's focus on that country at a time when devolution was driving policy divergence between the constituent parts of the UK. The English experience is of particular international relevance as it has witnessed a deeper implementation of the market-based policies, which have been a significant feature of public services reform in the UK.

Debates about the third sector's involvement in public service delivery have always taken place in a wider context. Even 20 years ago, Kendall and Knapp commented that one appeal of the voluntary sector was as a ‘way to legitimize constraints on, or even cuts in public social expenditures at times of fiscal austerity’ (Kendall and Knapp, 1996: 7).