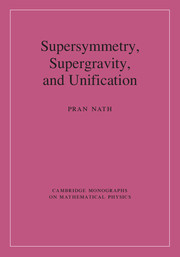 Supersymmetry, Supergravity, and Unification
Buy print or eBook[Opens in a new window]

Over the past decades a remarkable evolution has occurred in the development of particle physics in relation to general relativity, astrophysics, and cosmology. Till the early 1960s, gravity was considered a force not strong enough to be a player along with the electroweak and the strong forces, and did not receive any significant attention in texts on particle theory till that time. However, these perceptions changed at a remarkably rapid pace in the second half of the last century, most directly due to the discovery of supersymmetry and supergravity and, later, string theory. Thus, supergravity theory and theories based on superstrings bring gravity into the mix in an intrinsic fashion. Models based on supergravity, specifically supergravity grand unification, indicate that electroweak phenomena are driven by supergravity-induced effects connecting in a remarkable way the Planck scale with the electroweak scale. Another way that the connection between particle physics and cosmology has deepened over the past decades is due to the experimental observations that the universe is composed mostly of dark matter and dark energy, and particle theory is the likely place to achieve an understanding of these phenomena. Thus, while dark energy could be sourced by a tiny cosmological term in the Einstein equations, models based on supersymmetry and supergravity provide dark matter candidates in the form of a neutral spin 1/2 particle (the neutralino) and a spin 3/2 particle (the gravitino). Further, the early history of the universe is driven by particle physics via phenomena such as baryogenesis and leptogenesis, which can provide the observed baryon excess in the universe. Thus, currently there exists an unprecedented degree of fusion of astrophysics, cosmology, and particle theory. Each of these disciplines has its own glorious history with texts that center on them. However, for a young researcher entering the field of particle theory, developing a workable knowledge of these diverse fields presents a challenge. This text is written with the hope that it may make that task a bit easier. The text is written with the assumption that the reader has a workable knowledge of field theory.

Since the underlying theme of the book is unification, a number of interconnected topics are discussed. These include Einstein and Yang–Mills theories, the standard model, supersymmetry and supergravity, and cosmology along with some specialized topics.