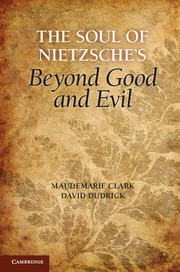 3 - Philosophy and the Will to Value

We turn now to aphorisms 5–11, which focus on the side of the “magnificent tension of the spirit” that we have called the will to value. These aphorisms provide substantial additional support for our claim that Nietzsche takes this will to be one side of the philosophical spirit: he takes what he says about metaphysicians in BGE 2 – that a valuation lies behind their philosophy – to be true of all philosophy. BGE 5 tells us that although philosophers claim to be motivated solely by a concern for truth, they actually arrive at their views by way of their values; such views are “generally a desire of heart sifted and made abstract,” which is then “defended by reasons sought after the fact.” BGE 6 makes it even more explicit that the will to value stands behind all philosophizing, or at least all “great” philosophizing: “Every great philosophy,” it tells us, has been rooted in “moral (or immoral) intentions.” And the most detailed example of the workings of the will to value in a particular philosophy comes in BGE 9’s discussion of the Stoics, who “pretend rapturously” to discover the “canon” of their law in nature but actually “want something opposite,” which is to “impose [their] morality, [their] ideal, on nature – even on nature – and incorporate them in her; [they] demand that she be nature ‘according to the Stoa,’” and “would like all existence to exist . . . as an immense eternal glorification and generalization of Stoicism” (BGE 9).

The upshot is that Nietzsche takes philosophy to be an essentially normative discipline, one that operates, and must operate, on the basis of ethical assumptions and principles. What this means and our reasons for interpreting Nietzsche in this way will become clearer in Chapter 5 and the chapters that follow it. The question of this chapter is whether Nietzsche holds the involvement of the will to value against philosophy. We have already argued that BGE 2, which introduces this will as the motivation for metaphysical philosophy, does not criticize metaphysicians for allowing it to influence their philosophy. But the aphorisms we have just quoted do give the impression of bemoaning the way in which philosophers’ values have influenced their view of the world.