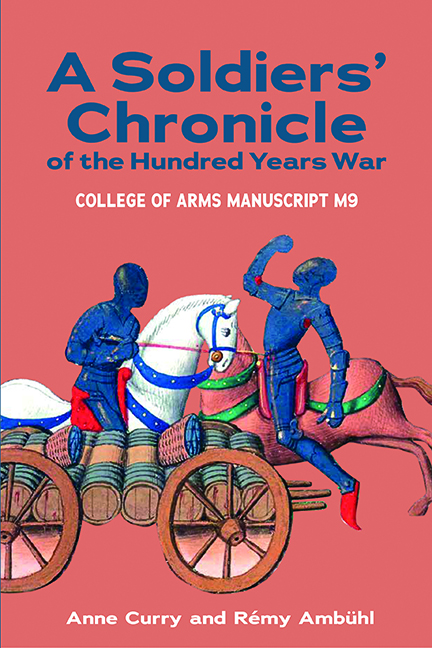 The M 9 chronicle is an intriguing text, not least because it was written in French for an English recipient at a time when the routine use of French among England's literate population was dying out. In this contribution to the present volume, I explore what options were available to someone wishing to write a French text in England in the fifteenth century, and examine the linguistic features of the M 9 chronicle against that background. It will be shown how the varieties of French existing in that period differed from each other, reviewing the main features of the late medieval French language as used on the continent, and comparing them with those of the insular variety of French traditionally known as Anglo-Norman.

The later years of Anglo-Norman have benefited from greatly increased research attention since the millennium. A rough consensus has emerged that it remained ‘a perfectly serviceable variety of medieval French’, though a highly distinctive one in various linguistic respects, until its demise in the fifteenth century. In conventional textbook presentations, continental French, sometimes labelled ‘Parisian’, is taken as representing a prestige norm from which the French of England deviated in various ways. As will be seen, continental French was far from being uniform, but in any event by the thirteenth century at the latest Anglo-Norman was clearly idiosyncratic in its spelling and grammar. When it finally died out is debatable: records were still being kept in this form by some administrators in the 1420s and occasionally even beyond. However, it is safe to say that outside the law courts little use was still being made of insular French as a distinct variety by the 1450s, when the M 9 chronicle was composed.

The M 9 chronicle is in fact ‘the only known example of a chronicle of the fifteenth-century phase of the [Hundred Years] war written in England in French’. Its singularity in that respect was explained by McFarlane as due to the fact that the scribe responsible for composing the chronicle, Luket Nantron, was a Frenchman. In this current volume, an argument has been made for the various contributions of all those involved: Basset, Hanson and Worcester.