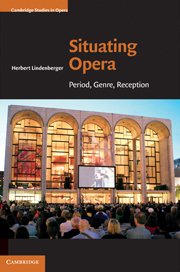 9 - A brief consumers' history of opera

It is easy enough to imagine doing a history of opera based on a succession of musical texts, or librettos, or, what is much more usual, a combination of these. A history of opera can also, as is frequently the case these days, consist of a history of performers and performing practices. But what about a history of how members of the audience engaged, or may have engaged, with what they heard and saw? As a preliminary sketch toward this sort of history, consider the following significant moments, each roughly a half century apart.

What must they have thought, those noblemen of Mantua, as they witnessed the first performance of Monteverdi's Orfeo? Surely they were not aware that they were observing the birth of a new art form, one that would continue and evolve for at least four more centuries. Strictly speaking, however, this was not exactly the birth of opera, for several works – all of them attempts, in one way or another, to activate the theories about the rebirth of Greek drama enunciated by the Florentine Camerata – had been performed during the preceding decade. But Monteverdi's was something different from these earlier operas, whose continuous recitative strikes us as ultimately boring when we hear it revived today. For Monteverdi not only gave his recitative a dramatic intensity largely lacking in that of Caccini and Peri (who had both set to music this same ancient myth), but he also found a means of varying degrees of intensity with choruses and with lyrical outbursts that looked forward to what would later come to be called operatic arias.