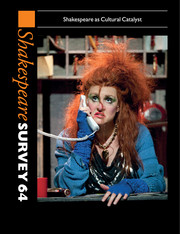 The Year’s Contribution to Shakespeare Studies

It might seem somewhat perverse of me to open with a discussion of a study that is in most respects not about Shakespeare, but Andrew Gurr's Shakespeare's Opposites, which offers a ‘biography’ of the Admiral's Company that played at the Rose and at the Fortune, rival playhouses to those used by Shakespeare's King's Men, is in some sense rich proof of Emma Smith's point in another essay this year (on ‘Shakespeare and Early Modern Tragedy’ in The Cambridge Companion to English Renaissance Tragedy, ed. Emma Smith and Garrett A. Sullivan, Jr) that Shakespeare is always the ‘elephant in the room’ (p. 132) when talking about early modern drama in its wider sense.

Gurr has of course written many of the seminal works of recent decades on the early modern playhouse and its playing and staging practices. Shakespeare's Opposites is an elegant disquisition on one particular company, echoing in its focus the move of recent repertory studies to turn our attention to the company and its repertory as categories for understanding. Gurr draws our attention with consummate skill to the ways in which the Admiral's Company dealt with the ‘daily routine of performing a different play each day to much the same body of customers’, facing ‘the fact that the same familiar faces had to appear on stage each playing a different role every afternoon’ (p. 1). Thinking in particular through the charismatic and entrepreneurial performances of Edward Alleyn (contemporary responses and accounts indicate as much), Gurr explores how doubling and also knowing use of disguise became a positive tactic or strategy in the company's approach to this practical dilemma. Leads were constantly given roles involving quick-change disguises and audiences in turn became well trained in the art of noticing and understanding these swift transformations of identity and costume. Gurr's stress is very much on novelty and innovation within the Admiral's Company's repertoire; other innovations made by the company included the introduction of contemporary London as a setting for plays, an approach inaugurated by William Houghton's Englishmen for My Money. What is brilliant about this book is that it connects with the stage in such real ways, with the fragmentary records of ‘theatrical brilliance’ rather than just linguistic pyrotechnics on the page, and in this way it does offer new modes for understanding and reabsorbing Shakespeare (not least as a collaborative and entrepreneurial author) within the wider early modern context. In this respect, Gurr's book connects in important ways with Emma Smith's aforementioned essay which speaks about the problematic ways in which institutional culture has caused the separation of Shakespeare and his plays from their time of production, as if texts like Hamlet were somehow produced sui generis rather than from within the complexities of the revenge drama tradition (p. 132). Smith's essay, which focuses in on issues of form, character and tone, demonstrates the relationship of Hamlet to The Spanish Tragedy and the kinships of Othello and Macbeth with domestic tragedy. In a striking comparison of Webster's The Duchess of Malfi and in particular its deployment of soliloquy, she also draws out differences between Shakespeare's reputation for soliloquies that confide and build shared intimacies with audiences and Webster's ‘alienating tragic aesthetic’ (p. 141), which means that the Duchess herself conceals as much as she reveals in these peculiar moments of ‘aloneness’ on the stage. Nevertheless, Smith makes the crucial point that this version of Shakespeare is itself only partial and does not account for the radical dissonances of early tragedies like Titus Andronicus, which she explores partly through the lens of modern performances and interpretations. This is a smart-thinking essay which does important work in terms of repositioning Shakespeare's plays ‘in dialogue, forward and back, with other contemporary tragedians’ (p. 134). Gurr's book, too, I think achieves this ‘repositioning’ dialogue as we are forced, by studying his ‘opposites’ and rivals, to understand Shakespeare from within the societal contexts of early modern crowds, plague and touring regimes, and commercial enterprise. There is, in the process, a superb analysis of the collaborative writing practice (pp. 104–6) as well as expert analysis of the archaeological finds from early modern theatre sites and what they might tell us about the staging practices and conditions within which Shakespeare worked and wrote.