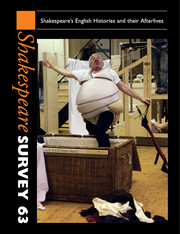 This article is about rites of oblivion in Shakespearian history plays and Elizabethan culture. The conjunction of ritual and forgetting might well seem paradoxical at first sight. After all, ritual is both formally and functionally associated with memory: rehearsing highly conventionalized topoi, gestures and acts, ritual is built on repetition and recognition. It works effectively only as a formalized act that recalls a social frame of reference which asserts the validity of the ritual and in turn is asserted by it. By the same token, cultural memory depends on rites of commemoration that ‘invite, rehearse or enforce social modes of recollection’. The words ‘re-collection’ and ‘re-member’ point to both the repetitive form and the social function of ritual: turning individual members of society into an imagined community, it serves to establish continuity and collective identity. Given this mutually constitutive relation between ritual and memory, can there also be rites of oblivion? If so, what form would such ritual forgetting take, and what would be its social function? What cultural work does oblivion perform? Is there, in short, an ars oblivionalis just as there is an ars memorativa?

In a seminal essay of 1988, Umberto Eco addresses this last question and negates it categorically. From his semiological perspective, forgetting is the reverse of memory and, by extension, of the use of signs as ‘a means of making present, never absent’. He deduces from this that neither the acts of oblivion nor their effects can ever be represented, that forgetting is a priori excluded from the cultural economy of signs and meanings. Likewise, whereas he sees remembrance as a constitutive force of culture and society, Eco dismisses forgetting as a destructive force of nature beyond human control and intentionality. I would like to suggest here that memory and oblivion are in fact complementary rather than mutually exclusive forces and that forgetting can indeed be purposeful and deliberate. Based on this premise, I will explore how the relation between mnemonic rites and oblivion is represented on the early modern stage.