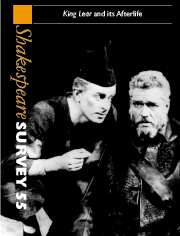 Since the 1960s, when it usurped the throne securely occupied till then by Hamlet, King Lear has reigned supreme as Shakespeare's masterpiece and the keystone of the canon. The last twenty years of the twentieth century have seen the play fall prey to a whole new tribe of critics, many of them hostile and bent on Bardicide. But none of them inclines one to doubt R. A. Foakes's prediction that 'for the immediate future King Lear will continue to be regarded as the central achievement of Shakespeare, if only because it speaks more largely than the other tragedies to the anxieties and problems of the modern world'.

As the touchstone of literary value and star witness in defence of the discipline, the tragedy is fated to be the target of every critical approach keen to stake its claim to priority. The most persuasive account of what Shelley deemed 'the most perfect specimen of the dramatic art existing in the world' seizes the flagship of the entire subject. King Lear has consequently become an exemplary site of contention between the leading schools of contemporary criticism; and to examine the most influential rival readings of Lear is to bring into focus not only the key disputes dividing Shakespeare studies today, but also the current predicament of criticism itself.

In his survey of critical views of King Lear between 1939 and 1979, G. R. Hibbard noted that 'a crucial shift was taking place round about 1960, not only in the controversy as to whether King Lear is, or is not, a Christian tragedy, but also in critical assumptions and methods'.