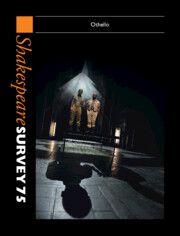 Nearly an hour into B. R. Chopra’s Hamraaz (‘Confidant’, 1967), Kumar, the protagonist, starts suspecting his wife, Meena, of infidelity. That his suspicions are incorrect is something that the film clarifies only later. But it hints at the unjust nature of his misgivings at the very moment that they start taking root in his mind by having him, a theatre actor, perform in the title role of Othello. Notably, the scenes we see him act in include those of Iago manipulating Othello with claims of Desdemona’s supposed adultery, and Othello’s subsequent murder of Desdemona. Kumar, distraught over the possibility of Meena’s unfaithfulness, lets his anger seep into his performance, so much so that he almost kills Shabnam, his co-star playing Desdemona, during the enactment of Othello’s climax. Later, when he intercepts what he thinks is a love-letter to Meena from her lover, Kumar leaves his residence on the pretext of going to Poona, but actually loiters around the house in disguise, hoping to catch Meena and her paramour in the act. His disguise consists of a false beard and a black coat, which resembles the bearded look he had sported and the dark robes he had worn while playing Othello. As he waits outside his house, an unknown killer shoots Meena dead, and Kumar, upon seeing her corpse, is devastated not only by her death, but also by the realization that, had he remained in the house with his wife, he could have protected her. As he weeps and calls himself Meena’s ‘kaatil’ (‘murderer’), one is reminded of Othello’s lament in the aftermath of his murder of Desdemona: ‘Whip me, ye devils, / From the possession of this heavenly sight. / Blow me about in winds, roast me in sulphur, / Wash me in steep-down gulfs of liquid fire! / O, Desdemon! Dead Desdemon! Dead! O! O!’ (Othello, 5.2.284–8)