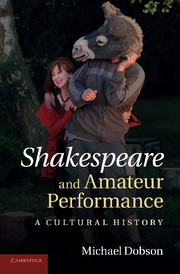 Let but a Briton step upon the stage,

Whence will he draw the glass for every age?

To one lov'd fount of magic he will go;

With one lov'd name his head and heart will glow;

One only volume will his hand unroll;

SHAKESPEARE, the mighty master of the soul!

This is a book about one of the most widespread and significant ways in which the plays of William Shakespeare have participated in English-speaking culture over the four centuries since they were written. It offers the first ever sustained examination of the contexts and styles in which people who are not theatrical professionals have chosen to perform Shakespeare's plays for themselves and their immediate communities, in locations ranging from aristocratic drawing rooms to village halls, and from military encampments to rain-swept cliffsides. This is an area which earlier studies of Shakespeare's reception and dissemination – including my own – have substantially overlooked, and they have been mistaken in doing so. While amateur productions generally have shorter runs than professional ones, over time they have been far more numerous, and at several important points in theatrical history the geographical scope and social inclusiveness of the amateur theatre have dwarfed those of the commercial and subsidized playhouses. In the immediate post-war years, for example, some provincial English cities had as many as fifty competing amateur dramatic societies, and even the small Yorkshire town of Mirfield, birthplace of Patrick Stewart, was home to six: once asked by an American interviewer whether his working-class parents had been surprised that he had become interested in the classical theatre, Stewart replied that given his home town's investment in drama they would have been more surprised if he had not.