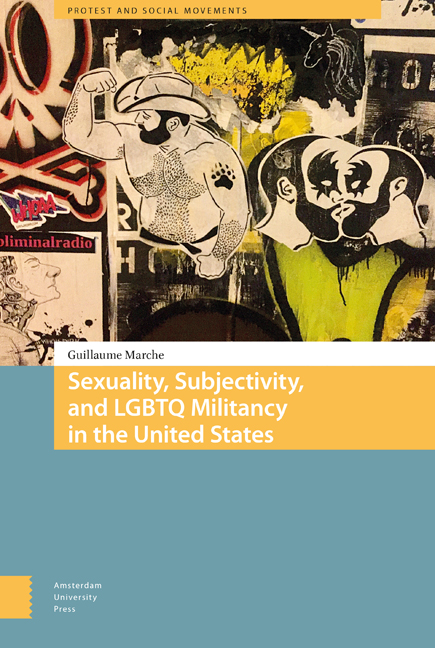 This LGBTQ movement in the United States has won decisive victories, but it has become institutionalized and less reliant on grassroots mobilization, an evolution that can be correlated to the disappearance of sexuality from its claims. Hence the need to study the intersection of actors’ individual aspirations and the movement's collective orientations. The introduction presents the book's longitudinal perspective on the fluctuating fortunes of sexuality in LGBTQ mobilizations and their impact on the movement's degree of proactiveness and offensiveness. It presents the book's microsociological approach “from below” and its emphasis on actors’ subjectivity and emotions, as well as the empirical and other material on which the study is based, provides a note on terminology, and summarizes the subsequent chapters.

For more than 40 years, the social movement that is now known as the lesbian, gay, bisexual, transgender, and queer (LGBTQ) movement has been challenging American society's views on homosexuality and the expression of nonconforming sexual desires and sex, gender, and sexuality-based identities. LGBTQ mobilizations are among the greatest social transformations that Western societies experienced in the twentieth century. Emerging in the wake of the various protest movements that appeared following the postwar economic boom, these movements have deeply changed the experience of homosexuality, reduced its stigmatization, reinforced its acceptance, and even helped to redefine heterosexuality, conjugality, the family, and the expression of desire.

The movement has gained considerable vitality since the 1960s and 1970s, which helped to withstand even the onset of AIDS in the 1980s. In many ways, gay mobilization against AIDS facilitated the recognition of gays and lesbians and the legitimation of the movement that speaks for them. In the United States, the LGBTQ question gained political centrality in the late 1980s. Indeed, the acute sexual, sanitary, and moral issues raised by the AIDS epidemic, the harsh political debates that resulted from them, and the vitality of LGBTQ militancy mobilized in response meant that the 1980s were a key turning point in the history of this movement.