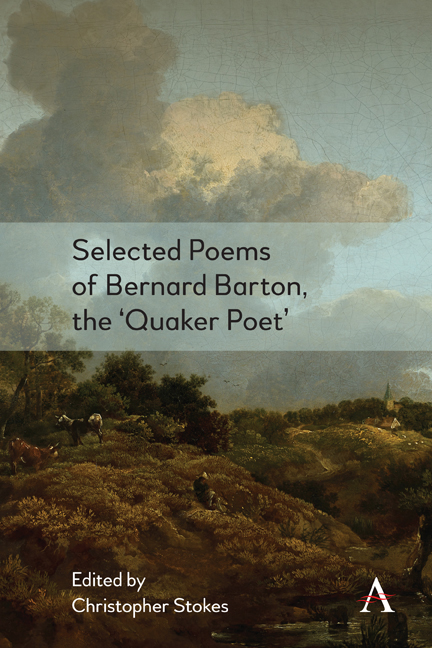 In 1831 the poet laureate Robert Southey wrote simply ‘who has not heard of Bernard Barton?’ It is an ironic question for the modern reader – or even the modern scholar – for whom his poetry has passed into almost total obscurity. Yet certainly for the reader of the 1820s and 1830s, he would have been immediately familiar as the author of several volumes of verse, a key devotional poet, and a prolific contributor to periodicals and literary annuals. Reputedly, an English actor called Barton was announced in a Paris theatre in 1822 and ‘the audience called out to inquire if it was the Quaker poet’. Indeed, one could argue that Barton did not even need to be named: a reference to ‘the Quaker Poet’or ‘broad brims’ in the pages of a journal was enough to elicit instant recognition. Friendships and correspondence with the Romantic essayist Charles Lamb and Edward FitzGerald (translator of The Rubáiyát of Omar Khayyám ) ensured his work remained culturally visible after his death in 1849, but by the time of E. V. Lucas's biography in 1893, his star was waning – before being eclipsed entirely. This occlusion is a shame. His is a unique nineteenthcentury poetic voice: one of sun-dappled Suffolk woodland and heath; gentle reflections on history, time and loss; and affectionately painted domestic scenes. It is influenced by Wordsworth, Cowper and Pope; the sentimental conventions of late Romantic writing; and fellow county poets such as George Crabbe and Robert Bloomfield. Nor is he limited to one strain: across his work one finds devotional verse, political writing, ekphrasis and even zesty satire.

One special and distinctive element that shapes this poetic voice is Quakerism. Southey's rhetorical question was asked in the context of a remarkable emergence: in 1815, William Hazlitt had concluded that ‘a Quaker poet would be a literary phenomenon’ and almost a contradiction in terms. The Society of Friends, a once revolutionary seventeenth-century sect that had retreated into quietism in the eighteenth century, appeared quintessentially unpoetic. They eschewed fashion and decoration, never attended concerts or dances, proscribed novels and tightly controlled practices of reading among members.