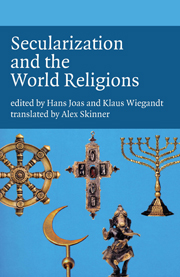 Strictly speaking, the above title is incorrect. It is certainly possible to speak of ‘Catholicism’ to designate that form of Christianity which, alongside the Orthodox churches on the one hand and those decisively inspired by the sixteenth-century Reformation, together with religious revivalist movements and ‘sects’ on the other, represents the third strand of Christian tradition: the Roman Catholic ‘world church’ centred on the office of the Pope. But there is neither a Protestant ‘world church’ comparable to Roman Catholic centralism nor any other kind of globally organized institution that might be in a position to unite the factual diversity of Protestant churches and groups. Since its beginnings in the reformist movements of the sixteenth century, ‘Protestantism’ has been a highly plural, multi-layered, even contradictory phenomenon, and there are many good reasons, from both a sociology of religion and a theological perspective, for consistent use of the plural ‘Protestantisms’ rather than the overly abstract collective singular. For ‘Protestantism’ or the adjective ‘Protestant’ exist solely within an almost overwhelming profusion of thousands of churches, voluntary communities, charismatic movements and groups. Despite elementary differences in piety, liturgical tradition, theological doctrine and moral behaviour, however, these converge in the fact that their roots can be traced back to the reformist protest of the sixteenth century and that, as a result, they understand the Christian church not as a powerful institution of salvation in which the ordained bishops and priests take spiritual precedence over the laity, but as a community of blessed sinners living the ‘priesthood of all the faithful’ and constituted by the Holy Spirit.