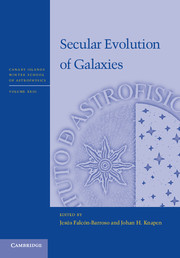 Galaxy morphology has many structures that are suggestive of various processes or stages of secular evolution. Internal perturbations such as bars can drive secular evolution through gravity torques that move gas into the central regions and build up a flattened, disk-like central bulge, or which may convert an open spiral pseudoring into a more closed ring. Interaction between individual components of a galaxy, such as between a bar and a dark halo, a bar and a central mass concentration, or between a perturbation and the basic state of a stellar disk, can also drive secular transformations. In this series of lectures, I review many aspects of galaxy morphology with a view to delineating some of the possible evolutionary pathways between different galaxy types.

A principal goal of extragalactic studies has been to understand what drives the morphology of galaxies. It is important to determine the dynamical and evolutionary mechanisms that underlie the bewildering array of forms that define the various galaxy classification schemes used today (e.g., Sandage & Bedke 1994; Buta et al. 2007), because this will allow us to establish the relationships, if any, between different galaxy types. Physical interpretations of galaxy morphology have revolved around two different domains: (1) formative evolution, where rapid, violent processes, such as hierarchical clustering and merging, led to formation of major galactic components, such as bulges, disks, haloes, and presumably, the Hubble sequence (e.g., White & Rees 1978; Firmani & Avila-Reese 2003); and (2) secular evolution, where disk material is slowly rearranged through the collective interaction of instabilities, such as bars, ovals, spirals, and triaxial dark matter haloes (Kormendy & Kennicutt 2004, hereafter KK04).