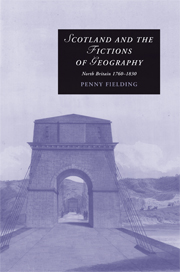 5 - Ultima Thule: The limits of the north

The geometries of Great Britain, calculated by the uneasy relations of time and space, and by the pressure of the local on the national, reveal a nation whose cultural discourses both produce and destabilise the division of the kingdom into North Britain and South Britain. As I have argued, Scotland in the late eighteenth and early nineteenth centuries sought the parity that such a symmetry offered, yet simultaneously revealed the spatial fissures and temporal discontinuities inherent in the attempt to describe Britain as a northern nation. In the final two chapters, I want to explore what happens when the sense of geographical totalities becomes relaxed, when nations, states or continents are not viewed as necessary or discrete wholes. In the current chapter, I look at two texts that address their own situation at a nominal margin and do not assume that a nation radiates from its national capital, and in the subsequent chapter I explore James Hogg's radical dissolution of the premises of Enlightenment spatiality altogether. Although the Hogg stories are the latest to be published of any in this study, we should not assume a clear transition from the Romantic tensions between local and global, scientific and empirical space to what I shall describe as the post-Enlightenment space of Hogg's imaginative world. Rather, I hope to identify the imbrication of these models in the early nineteenth century, either when the rational structure of Enlightenment spatiality cracks at the seams – as we shall see in the case of Hogg – or when, as in the present chapter, localities are not deemed to be fixed or static in the first place.