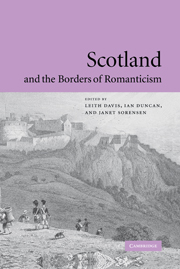 13 - “The fause nourice sang”: childhood, child murder, and the formalism of the Scottish ballad revival

In a 1787 letter, Walter Scott attributes his poetical pursuits to his lifelong love of “ballads and other romantic poems,” poems which he has “read or heard” from the “earliest period of [his] existence” as a “favourite, and sometimes as an exclusive gratification.” It would seem, however, that not all of Scott's beloved ballads provided gratification exclusively, for he continues:

I remember in my childhood when staying at Bath for my health with a kind aunt of mine, there was an Irish servant in the house where we lodged, and she once sung me two ballads which made a great impression on me at the time. One filled me with horror. It was about a mason who because he had not been paid for work he had done for a certain nobleman, when that lord was absent, conveyed himself into the castle with the assistance of a treacherous nurse and murdered the lady and her children with circumstances of great barbarity.

The ballad Scott describes here is “Lamkin,” one of the many Scottish ballads that contain an account of infanticide. In most versions of this ballad, a “false nurse” helps Lamkin achieve his revenge. Together, the nurse and the mason fatally wound the infant son so that its cries will bring the mother down the stairs to meet her own death. When the nobleman returns at the end of the ballad, he rights these wrongs by hanging, burning, or boiling Lamkin and the nurse to death.