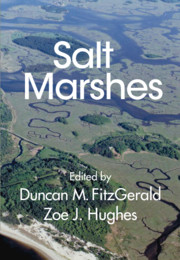 Salt marshes are expected to undergo substantial change or, potentially, disappear in the next couple of centuries as a result of rising sea level. Increasingly, scientists are asking the question: how long can they survive? This book draws on global expertise to look at how salt marshes evolved, how they function, and how they are responding to the stresses caused by social and environmental change. These environments occur throughout the world: behind barrier islands, bordering estuaries, and dominating lower delta plains (Fig. 1.1) in warm to cool latitudes (≥ 30° latitude). Up until now, previous loss and degradation of coastal marshes has been related to a variety of human actions including dredging and filling, reduction in sediment supplies, and hydrocarbon withdrawal, as well as other causes. However, in the future the greatest impact to marshes will be a consequence of climate change, especially sea-level rise (SLR). Most of the present marshes formed under very different sedimentation and SLR regimes compared to those that occur today. During their formation and throughout their evolution, the rate of SLR was relatively slow and steady, between 0.2 and 1.6 mm/year (Table 1.1). The sustainability of marshes is now threatened by an acceleration in SLR to rates many times greater than those under which they initiated and have evolved. For example, the Romney marsh, which is located north of Boston, Massachusetts, contains a 2-m-thick peat that began forming 3.1 ka BP when sea level was rising at about 0.8 mm/year, a rate that slowed to 0.52 mm/year around 1 ka BP (Donnelly 2006). The rate of SLR in Boston Harbor is now 2.85 mm/year (NOAA 2019), which far exceeds the rate occurring when the Romney marsh built to a supratidal elevation. Eventually, SLR, along with marsh-edge erosion, will outpace the ability of most marshes to accrete vertically (Crosby et al. 2016) and/or compensate for marsh loss by expanding into uplands (Kirwan et al. 2016, Farron 2018).