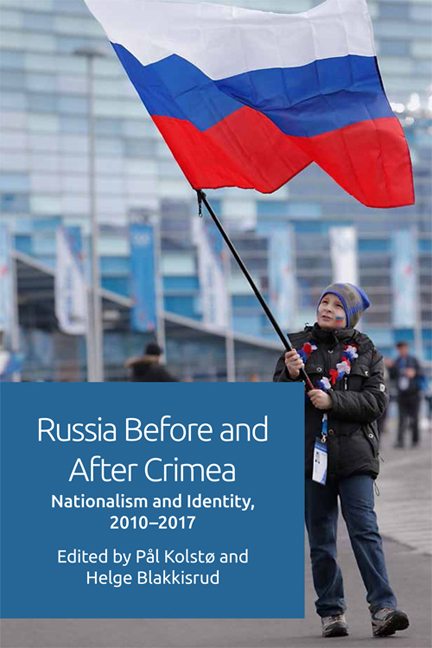 Russia Before and After Crimea
Nationalism and Identity, 2010–17

Russia's annexation of Crimea in March 2014 marked a watershed in European history: for the first time since the Second World War, a European state violated the sanctity of international borders and appropriated part of the territory of a neighbouring country. Western states reacted strongly and negatively, and Russia–Western relations may well have been severely damaged for the foreseeable future.

Politicians and scholars alike are struggling to understand how this situation came about. Like all historical turning points, the current breakdown in Russia–Western relations has both immediate triggers and a longer history of gestation. We can choose to focus on the details of the political confrontations in and around Ukraine that led up to this event: Ukraine's parallel negotiations with the European Union (EU) and the Eurasian Economic Union (EEU); President Viktor Yanukovych's abrupt decision not to sign the Deep and Comprehensive Trade Agreement with the EU in November 2013; the massive protest this decision unleashed in the Ukrainian population; and finally, Yanukovych's flight and dismissal. Alternatively, we can broaden the timeframe to include the growing distrust between Moscow and European/North American capitals over the last two decades fuelled by – among other things – NATO's eastward expansion and deployment of ballistic missile defence in former Eastern Europe, on the one hand, and Russia's aggressive policy towards Georgia and other neighbours, on the other. Or we can widen our analytical lens even further to include the more general mental framework within which Russian politicians are acting: the constraints and drivers imposed by perceptions, emotions, self-understanding and world outlook. This book is an attempt to contribute to this latter endeavour by examining and discussing contemporary Russian nationalism in its various incarnations.

Some have interpreted the Putin regime's sudden territorial aggression towards Ukraine in 2014 as a manifestation of deep-seated Russian imperialism: that the Russians have never been reconciled to the collapse of the Soviet Union, and will exploit any weakness in the neighbouring states to try to re-establish the lost empire (see, for example, Grigas 2016). As is often pointed out, Vladimir Putin is on record as having described the dissolution of the Union of Soviet Socialist Republics (USSR) as ‘a major geopolitical catastrophe of the twentieth century’ (Putin 2005).