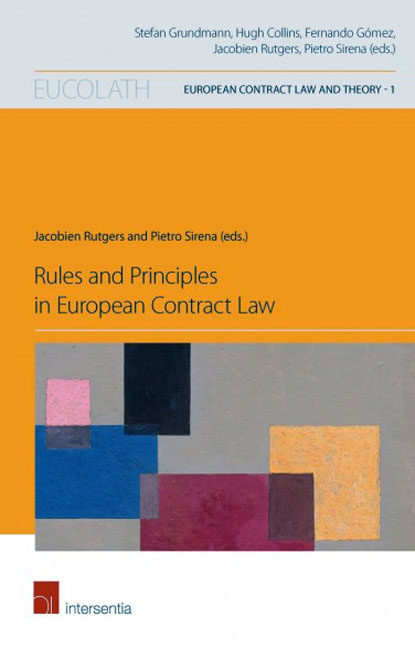 Principles versus Rules in the Emerging European Contract Law

Principles of law play an important role in any legal system. Both in common law and civil law jurisdictions, courts not only plead ‘principles’ to interpret statutory provisions, but also apply them while adjudicating specific cases. Academics oft en attempt to describe or explain the essence of a certain field of law by reference to a number of underlying ‘principles’. Lawyers frequently construct legal arguments, either positive or normative, relying on presumably established ‘principles’. Finally, and more recently, legislators have come to accept that their power is restricted by ‘principles’ of law. In particular, in the wake of the Second World War, ‘general principles’ have been formally acknowledged and solemnly embraced by many national constitutions, as well as by international conventions on human rights.

At the European level, the Court of Justice has, in recent decades, developed a rich jurisprudence of ‘principles’, which at first have solely concerned the definition and limits of the Union's powers (i.e. the principles of primacy, effectiveness, proportionality, etc.).

Such principles have therefore been depicted by scholars as ‘institutional’, being understood as rooted in and pertaining to the domain of public law. Not surprisingly, most of them have later on found their way into the Treaties of the Union.

Starting from the 1970s, however, the Court of Justice has declared and enforced more substantive principles, which concern the protection of human rights (i.e. dignity, equality, freedom of religion, etc.) and are (at least partly) applicable to the sphere of private law.

More recently, the Court of Justice has even shown an increasing willingness to acknowledge and declare ‘general principles of civil law’, relying upon values which traditionally have been thought of as strictly inherent to private law. Relevance has been therefore given to the principles of full compensation, good faith, restitution of unjustified enrichment, etc.

In the meanwhile, important ‘soft ‘ law instruments, which aim at streamlining the ‘common core’ of European private law, have made explicit reference to ‘principles’, shared by all or at least most European legal systems.