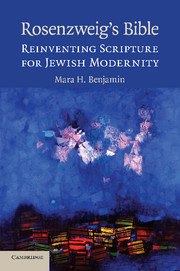 4 - Toward a New Encounter with the Bible

In a 1928 review of the new german encyclopedia Judaica, Rosenzweig wrote, “The most common obstacle to the all-embracing unity [Allgemeinsamkeit] of Jewish spiritual undertakings is the position toward the Bible.” The neologism that Rosenzweig invented in the review, Allgemeinsamkeit, conveyed the importance of the Bible as the center of Jewish religious and communal life. It expressed his sense of the totality, unity, and commonality that, he held, had been hindered by the inadequacies of the reigning approaches to the foundational text of Judaism. To what could this situation be attributed? Rosenzweig minced no words. Modern Jewry had become accustomed, he argued, to viewing the Bible only through the lens of “Protestant Wissenschaft,” and had failed to develop critical scholarly tools indigenous to the Jewish tradition and its texts. “Protestant Wissenschaft,” Rosenzweig wrote, was “almost solely concerned, in a natural continuation of the old Christological effort to make everything Jewish merely a pre-history, … with preliminary questions regarding the history of the origin of our text.” Echoing Solomon Schechter's famous charge, Rosenzweig suggested that higher criticism was nothing other than the old wolf of Christian supersessionism dressed in the sheep's clothing of academic objectivity.

I argued in Chapter 3 that Rosenzweig's writings on Martin Luther in particular reveal polemical elements that undergirded the Buber–Rosenzweig Bible translation. The rest of his essays on biblical translation continue this polemic. Rosenzweig cast his own approach to the Bible as simultaneously Jewish and more authentic, and thus able to apprehend the Bible's textual and spiritual integrity.