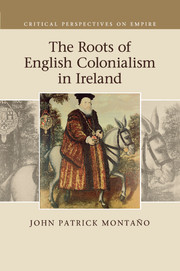 Turning away for a moment from the plans and policies of Wolsey, Cromwell, St. Leger, and others, and before turning to the later strategies for the reformation of Ireland and the Irish, it may prove helpful by way of introduction to pass briefly over the historiography of Tudor reform in Ireland. If nothing else, an account of the arguments will aid our understanding of how cultivation, civilization, anglicization, and plantation are increasingly conflated. Scholars studying the period have engaged in a stimulating debate about the origins of a strategy for anglicizing Ireland under the Tudors. While all can agree that the Henrician reforms in religion and politics proved a failure in Ireland, there are differences about the basis for the reforms attempted by Henry and his children. Following the Kildare revolt, if not before, ministers in Dublin and London disagreed about the best strategy for reducing Ireland to civility: should it be conquest or conciliation, the “sword or the word,” in other words, increased militarization or reform. But whatever the choice, it is clear that an increasing emphasis on dispossession and plantation was recognized by the Irish for what it was: yet another attempt to lay claim to their land. The ambassador in Paris reported to the Privy Council that Irish lords “conspired to rid themselves from the yoke of England, and [believed] that it was time for them to do so, for otherwise, by little and little, they looked for none other but to be driven out of their ancient possessions.” Furthermore, this fear was recognized by St. Leger when defending his surrender and regrant strategy; he warned Henry that the recent rebelliousness in Ireland was rooted in the native lords “fearing to be expelled from ther said possessions,” and that granting them lands on “honeste condicions” was the only alternative to another conquest.