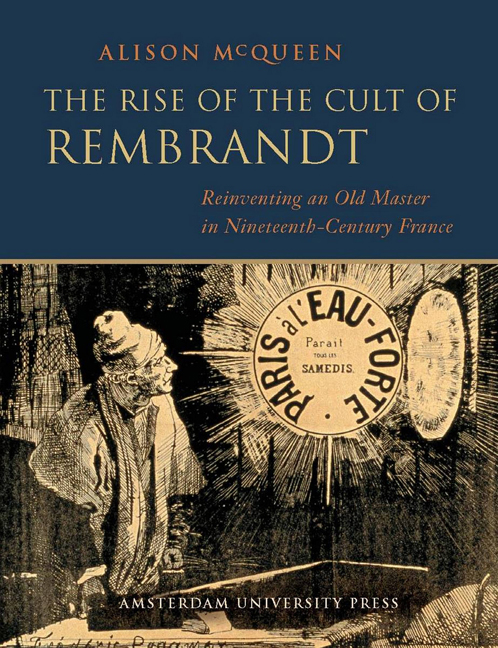 “ influence” on French printmakers as if it were a natural phenomenon. Because of the perception of Rembrandt's stature today, many assume he was always regarded as the master printmaker. Rembrandt's prints have certainly been popular since his lifetime. But the position he was assigned in nineteenth-century France as the leading past master of etching was more a constructed phenomenon than one that evolved naturally. Rembrandt's status as the emblem of the etching revival in France was carefully negotiated for him through the self-conscious efforts of French critics and artists through their print treatises, publications, associations, and works of art. As their emblematic figure, Rembrandt's techniques and achievements were then used to justify the goals of French painter-printmakers in the nineteenth century.

The consolidation of Rembrandt's significance in nineteenthcentury France can be seen first among vanguard etchers, particularly landscape artists associated with the Barbizon school in the 1830s and 1840s. He was then embraced by numerous critics and promoted as a validation of the achievements of contemporary French printmakers. At the same time, Rembrandt's stature was unequivocally established under the auspices of the Société des Aquafortistes in the 1860s. He became an emblem for the value of original prints, particularly etchings, by members of this society. They sought to liberate printmaking from its role as a reproductive process associated with engraving, a medium institutionally sanctioned by the French Academy, which involved direct carving of copper or wood with a steel gouge or burin.

Perceptions of Rembrandt's life and art as a model of artistic originality and individuality, which were disseminated through the works of French critics, historians, and artists, led to a veritable “cult of Rembrandt” among French etchers during the second half of the nineteenth century. In a paradoxical situation, Rembrandt's rising status was concurrently appropriated by French engravers in their efforts to combat those who challenged the creativity of their artistic pursuits. They also used him in their battle against the rise of photography as a means of reproduction. By the mid-1880s, through slower and more covert means, the role of reproductive copies exhibited at the French salons ultimately established Rembrandt's status within Academic circles.