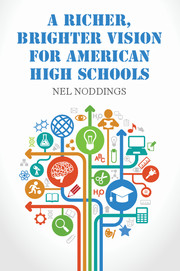 A Richer, Brighter Vision for American High Schools
Buy print or eBook[Opens in a new window]

9 - The Curriculum and Its Setting

In this chapter, we will consider more closely the ideas so far discussed and see what might reasonably be done to bring the curriculum and extra-curricular activities into line with these broad recommendations. This is to be done without insisting on a sweeping transformation that would eliminate, or even threaten, the traditional academic program. As pointed out throughout this book, such a transformation would be both utopian and hopeless. What follows, then, should be practical. We will look first at some modifications of the curriculum, then at the importance of extracurricular activities, and finally at the physical setting for high schools of the future.

It seems entirely feasible to expand existing courses with the theme and interdisciplinary team approach already described. The challenge, of course, is to apply the concepts of intellectual continuity and shared responsibility to the whole enterprise. Where possible, we want to connect the themes not only to central human questions but to each other and, certainly, to the subject matter of the standard classes. It is not suggested that the officially prescribed work of mathematics, science, or literature be suspended but, rather, that it should be enriched to include the chosen themes. The use of biography and literature can enrich the curriculum in every subject.

For example, in discussing the centrality of law, power, and economy of expression in mathematics, Barry Mazur departs from formal mathematics briefly to describe the use of dactyls in poetry. He asks us to consider the power of W. S. Merwin's “Elegy,” a one-line poem (“Who would I show it to”) consisting of two dactyls. As we learn about imaginary numbers from Mazur, we also hear all sorts of things from Rilke, Ashbery, Wordsworth, Yeats, and Coleridge. Mazur also reminds us that – for some odd reason – the later letters in the alphabet are considered somehow harder than the earlier ones, and he gives an example of this thinking from Virginia Woolf's To the Lighthouse.