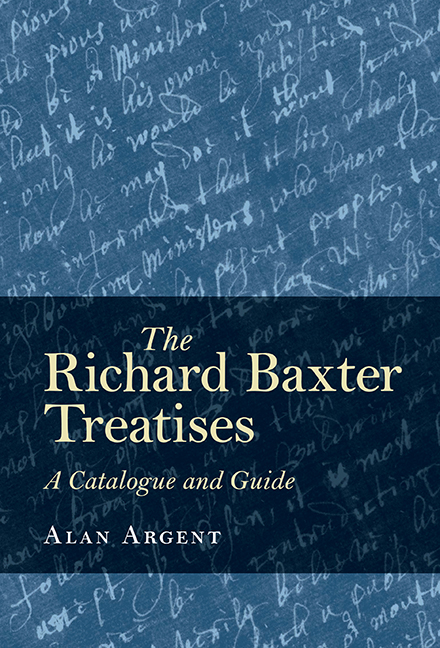 Richard Baxter (1615–91) was described by A. G. Matthews in Calamy Revised as ‘the outstanding figure among ejected ministers’. Although he was one of those ministers appointed as chaplains to the king in 1660, and despite his attendance at and contribution to the negotiations held at the Savoy to decide on the shape and details of the restored Church of England, he was harassed and imprisoned in the reigns of both Charles II and James II. Although at least one modern account states that Baxter ‘retired from the Church of England on the passing of the Act of Uniformity’, giving a misleading impression of genteel withdrawal from public life, he and almost 2,000 other nonconformist divines felt compelled to make a principled and self-denying choice to remain outside the establishment. Yet, in spite of the harsh treatment meted out to him after 1662, Baxter consistently favoured the cause of ecclesiastical comprehension and did not actually leave the Church of England, although he was inhibited in the continuance of his ministry. In fact he sought to and did attend the parish churches whenever he could, though that attendance also brought him some criticism.

N. H. Keeble has described Richard Baxter as ‘throughout his life a voluminous correspondent’, and the great volume of his correspondence is matched by that of his many other writings, which demonstrate a consistent engagement with current affairs, with movements in theology and with the vicissitudes of everyday life. Dr Williams's Library in London contains the great majority of the extant manuscripts that relate to Baxter, among which are numerous letters, the subject of Keeble and Nuttall's two-volumed Calendar of the Correspondence of Richard Baxter (Oxford 1991). Certainly Baxter could not refrain from writing. This puritan minister who did not attend university lived as much through his writings as through any other medium. The annotated list of Baxter's works, compiled by A. G. Matthews in 1932, contains 135 works written and published in his lifetime and six more published posthumously, including his autobiography, the Reliquiae Baxterianae (1696).