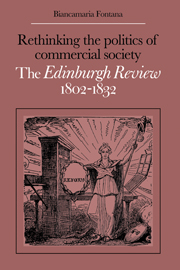 5 - Commercial society and its enemies: the debate on the First Reform Bill

The reviewers and the Reform Bill

One of the issues which has recurred repeatedly in the course of our analysis of the reviewers' writings is the question of the social identity and political influence of the ‘middling ranks’ and the implications of the impact which the extension of prosperity and education in advanced commercial society was bound to exert upon the state of parliamentary representation. In the debate on the First Reform Bill, a debate in which the reviewers took a prominent part from the late 1820s up to the year 1832 itself, this question naturally acquired a crucial relevance.

It is generally acknowledged that the Edinburgh Review played a leading role in promoting the 1832 Reform Act, though it remains questionable how far the reviewers themselves exercised a direct influence on the conduct and decisions of the Whig ministers. Among the reviewers, Brougham as lord chancellor was alone in being a member of Grey's Cabinet, and historians are agreed that the Whig leadership went to considerable lengths to limit his influence (although they are less unanimous in their estimate of the success of these efforts).

What is certain, however, is that the return of the Whigs to office in 1830 brought the reviewers suddenly much closer to the centre of political decision-making than they had ever been in the past. While Brougham became an exceptionally troublesome lord chancellor, Jeffrey too had been promoted, in the preceding year, to dean of the Scottish Faculty of Advocates. In that capacity, he became actively involved in the stormy Edinburgh election of 1831 and, through the good offices of Brougham, advised the Whig Cabinet on various issues of Scottish legal reform.