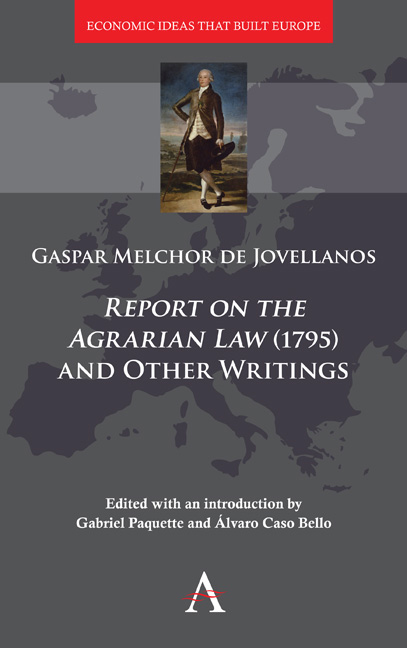 Introduction: Liberty (Libertad), Knowledge (Luces) and Reform (Auxilios) in the Economic and Political Thought of Jovellanos

Jovellanos, the Bourbon Reforms and the Spanish Enlightenment

Gaspar Melchor de Jovellanos (1744– 1811) was a leading figure of the late eighteenthcentury Spanish Enlightenment. His life and career coincided with what is known to historians as the period of the Bourbon Reforms, called “Bourbon” for the dynasty that ruled Spain and its Atlantic empire from the first decades of the eighteenth century. The reforms the Crown undertook, which touched all aspects of Spanish political, economic and social life, reached their apogee in the final third of the century. Many historians, though not all, have understood these reforms to have been influenced by the new currents of thought often associated with the Enlightenment, and thus classify the quickening of the pace of government action to reshape society as “enlightened reform.” Bourbon reformers rejected the notion of Spain as an eclipsed power. They endeavored to assert the Crown's rejuvenated sovereignty over its far- flung empire against the relentless encroachments by competitor imperial states, like Britain. Bourbon reformers attempted to turn away from the stable, resilient “composite” monarchy structure and, in its place, erect a unified nation- state, subservient to the monarchy and capable of inculcating a new patriotic spirit. They took practical steps— though sometimes tentatively, erratically and with few tangible results— in both the Old World and the New to further this aim.

The strenuous reform effort expended in Spain and Spanish America was formidable, even if it was seldom matched by the permanent results attained. Contemporaries witnessed fresh incursions into Amerindian- controlled lands, the spasmodic settlement of rustic peripheries from Patagonia to modern British Columbia and the military repossession of Florida, Louisiana and the Mosquito Coast. There were Crown- led attempts to overhaul the navy, improve and expand the army and colonial militias, revamp coastal fortifications and ports, modify university education, enact a less- regulated trade regime, boost mineral yields, encourage export- led agricultural production and wrest control of church property and patronage.