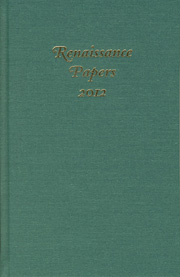 With the recent shift in literary studies towards what is often described as a “global Renaissance,” it is hardly surprising that figures of merchants and travelers both in early modern travelogues and plays have come under greater scrutiny as sites for understanding the formation of a fluid English identity, transnational commerce, emergent colonialism, and nation building. What still remains largely unexplored, however, particularly in the context of the East Indies trade, is the impact of this emergent globalization on the bodies of the European women who were closely related to the merchants or factors. While scholarship on plays such as Fletcher's The Island Princess or Dryden's Amboyna emphasizes the roles of both European men and their beloved native women, the white woman still remains a shadowy presence at the fringes of our current academic interest in the early modern spice trade.

This essay seeks to address this gap by turning to the public stage, particularly to a play that explores how the emergent trade with the East Indies appeared to affect the physical and moral complexion of one such European woman. In the trial scene of John Webster's play The Devil's Law-Case (1623), Jolenta, the sister of Romelio, an East Indies merchant enters with “her face colour'd like that of a Moore,” accompanied by two Surgeons, “one of them like a Jew.” Although the assembled people quickly recognize her they still comment on her changed complexion. Ariosto the advocate exclaims, “Shee’s a blacke one indeed” (5.5.40) while Ercole, one of her suitors, wails “to what purpose / Are you thus ecclipst?” (5.5.57–58). Of course, Jolenta’s transformation is temporary and apparently superficial; yet her blackening appears to gesture towards deeper concerns regarding the impact of the East Indies trade, particularly on a woman who has never left her home or sailed the high seas to profit from pepper, cinnamon, cardamom and mace.