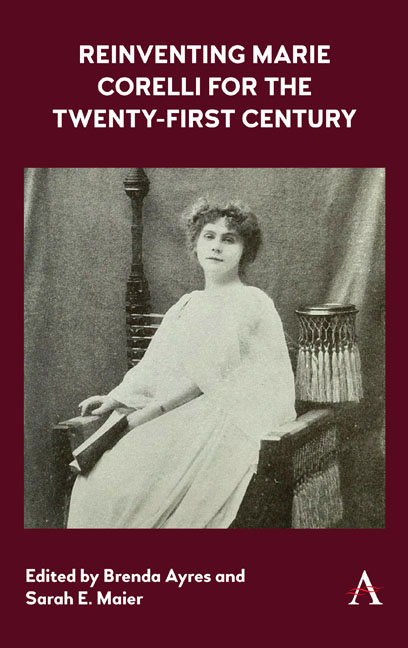 Julia Kuehn
Affiliation:
Professor of English at the University of Hong Kong.

This chapter situates Corelli within scholarly debates about public opinion—an area that has encountered a resurgence of interest in light of recent political events across the globe and the role the (social) media and the public have played in the representation, misrepresentation and manipulation of discourse. The nineteenth century was no stranger to the power of the people and of discourse; Corelli, as the first modern bestselling author (Federico 7), had an uncommonly good intuition with regard to what the public wanted and needed and how she could use or reject the various communication channels available to her for her own mission and success as a writer. As her idol Shakespeare had allegedly said: Public opinion is “the mistress of success.” The image that emerges from Corelli's fictional and nonfictional writings on this topic is complex and complicated as Corelli knew that there were a critical, reasoning public (reviewers), a consuming public (readers) and a political, national and colonial public for her to work with, which transcended conventional distinctions of class, race and gender but also of the public and the private realms. Furthermore, as the nineteenth-century literary sphere turned into a “literary market” and thus became subject to economic considerations, the public sphere became infused with the various private interests of publishers, authors, reviewers and readers.

This chapter takes Jürgen Habermas’ work as a critical starting point to explore Corelli's thoughts on the public sphere and public opinion, as expressed especially in her nonfictional collections The Silver Domino and Free Opinions Freely Expressed and in select novels. I argue that Corelli's literary success and critical thoughts reveal precisely what Habermas identifies as The Structural Transformation of the Public Sphere, as the English title of his 1962 study reads. More precisely, Habermas locates the moment in the outgoing nineteenth century—its final quarter—when the public sphere and public opinion transmogrify due to modern economic, social and political forces and the advent of the “culture industry,” and become what he considers debased versions of their former selves. I will trace Habermas’ argument and historical account of the public sphere—especially its birth in and, later, continued connection with the literary public sphere—before I illustrate the veracity of his claim through Corelli's writing on reviewers, publishers and readers.