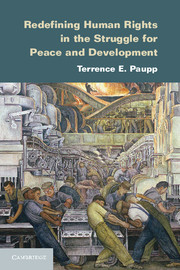 Terrence E. Paupp is an international law and human rights scholar. He holds a BA degree from San Diego State University, a Master of Theological Studies from the Lutheran School of Theology at Chicago, and a JD from the University of San Diego School of Law. Inspired by the moral and political message of President Kennedy and Senator Robert Kennedy, he was involved in the antiwar movement against the Vietnam War, was involved in efforts to advance the rights of farm workers in the UFW and, while an undergraduate at San Diego State University, wrote a 120-page study on the U.S. strategy and policies in the Vietnam War, which were purposefully designed to deny “sanctuary” to North Vietnamese troops in the civilian villages of North and South Vietnam, thereby worsening the refugee crisis in Vietnam and effectively creating a human rights crisis in Asia. Paupp was supplied with the transcripts of hearings on the Vietnamese refugee crisis from the office of Senator Edward Kennedy, and with the help of this documentation, he completed a scathing study and indictment of U.S. war policy in Indochina.

In completing his degree work at the Lutheran School of Theology at Chicago, his master’s thesis was dedicated to an analysis and a critique of liberation theology in Latin America. The title of his thesis was “The Revolutionary Core of Liberation Theology: The Union of Faith and Ideology in the Works of Hugo Assman and Juan Luis Segundo.” His focus on Latin America was initially inspired by the Kennedy-sponsored Alliance for Progress in the 1960s and also by revelations about the Nixon administration’s complicity in the overthrow of the democratically elected government of Chile under Allende. A process of research and intense study of these events inspired Paupp to engage in a critique of both U.S. foreign policy and its proclivity to engage in human rights abuses with an astute accuracy. As a direct consequence of these experiences and research, by the time he began teaching philosophy and religious studies at San Diego City College and Southwestern College, he also became a research associate for the Council on Hemispheric Affairs (COHA), a Washington, DC, think tank that monitors and reports on Latin America’s political developments and human rights record.