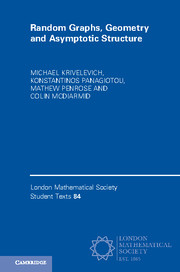 The theory of random graphs was established during the 1950s through the pioneering work of Gilbert and subsequently of Erdős and Rényi who set its foundations. Since then, the theory has been developed vastly and is by now a central area of combinatorics. Numerous, often unexpected, ramifications have emerged, which link it to diverse areas of mathematics such as number theory, combinatorial optimization and probability theory. Since its beginning, the study of geometric and topological aspects of random graphs has become the meeting point between combinatorics and areas of probability theory, such as percolation theory and stochastic processes. Nowadays, this interface has been consolidated through numerous deep results. This has led to applications in other scientific disciplines including telecommunications, astronomy, statistical physics, biology and computer science, as well as much more recent developments such as the study of social and biological networks.

The present book is the outcome of a short course that took place at the School of Mathematics of the University of Birmingham in August 2013 and was supported by the London Mathematical Society and the Engineering and Physical Sciences Research Council. Its aim was to provide a concise overview of recent trends in the theory of random graphs, ranging from classical structural problems to geometric and topological aspects, and to introduce the participants to new powerful complex–analytic techniques and stochastic models that have led to recent breakthroughs in the field.

The theory of random graphs is nowadays part and parcel of the education of any young researcher entering the fascinating world of combinatorics. However, due to their interdisciplinary nature, the geometric and structural aspects of the theory often remain an obscure part of the education of young researchers. Moreover, the theory itself, even in its most basic forms, is often considered quite advanced to be part of undergraduate curricula, and those interested, usually learn it mostly through self-study, covering a lot of its fundamentals but not much of the more recent developments. The present book provides a self-contained and concise introduction to recent developments and techniques for classical problems in the theory of random graphs. Moreover, it covers geometric and topological aspects of the theory of random graphs and introduces the reader to the diversity and depth of the methods that have been invented in this context.