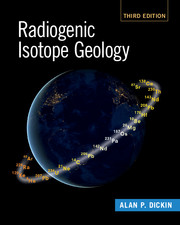 The past fifteen years have seen a quiet revolution in isotope geochemistry, as a once-arcane field involving ‘extinct’ radionuclides in meteorites has called into question fundamental geochemical models of the Earth itself. At the same time, increasing public awareness of the problem of anthropogenic global warming has focused attention on the role of isotope geochemistry in monitoring past and present influences on climate change.

The third edition of Radiogenic Isotope Geology attempts to place these and other recent developments in scientific thinking in their overall scholarly context.

The approach to the subject matter is historical, for three main reasons. Firstly, to give an impression of the development of thought in the field so that the reader can understand the origin of present ideas; secondly, to explain why past theories have had to be modified; and thirdly, to present ‘fall back’ positions lest current models be refuted at some future date. This approach embodies the scholarly principle that knowledge of the classic work in the field is the starting point for current research.

The text is also particularly focussed on three types of literature. Firstly, it attempts to give accurate attribution of new ideas or methods; secondly, it reviews classic papers which have become standards in their field; and thirdly, it presents case studies that have evoked controversy in the literature, as examples of alternative data interpretations.

The organization of the book allows each chapter to be a relatively free-standing entity covering one segment of the field of radiogenic isotope geology. However, the reader may benefit from an understanding of the thread, which, in the author's mind, links these chapters together.

Chapter 1 introduces radiogenic isotopes by discussing the synthesis and decay of nuclides within the context of nuclear stability. Decay constants and the radioactive decay law are introduced.

Chapter 2 provides an experimental background to many of the chapters that follow by discussing the details of mass spectrometric analysis (TIMS and ICP–MS), along with a discussion of isochron regression fitting.

The next three chapters introduce the three pillars of lithophile isotope geology, comprising the Sr, Nd and Pb isotope methods. Emphasis is placed on their applications to geochronology and their evolution in terrestrial systems. Chapter 3 covers the Rb–Sr system, since this is one of the simplest and most basic dating methods.