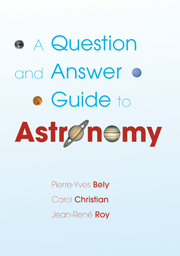 Life in the Universe

Are we alone? Does life exist anywhere besides Earth? Modern astronomy can help to answer these fundamental questions, but first we need to know what is meant by life.

The concept is hard to define. It used to be generally accepted that life is organized matter that exhibits seven crucial characteristics: growth, respiration (i.e. exchange of gases), nutrition, excretion, reproduction, reaction to external stimuli, and locomotion (the last is only partly true, since plants and many other organisms are not mobile). Matter in a crystal is organized, and one could argue that a crystal grows by nourishing itself with neighboring atoms, that it reproduces when it branches out, and that it reacts to external stimuli, contracting when subjected to an electrical charge, for example (as in the piezoelectric effect used in quartz watches). Nevertheless, a crystal does not breathe, does not excrete, and does not move. Then what about fire? A fire nourishes itself with combustible material, absorbs oxygen (breathes), grows, moves, can ignite additional fires in new locations (reproduces), excretes heat, and reacts to external stimulations such as wind or a fire extinguisher …

But if it can be argued that fire meets the seven basic criteria for life, living creatures fulfill one additional condition: they can mutate. This allows an organism to adapt to new environments and thus to evolve. Fire cannot evolve into a different form of oxidation, such as rusting, but we know from the fossil records that life transforms itself all the time, resulting in the extraordinary variety of forms around us: from bacteria to watermelons to oysters to elephants.