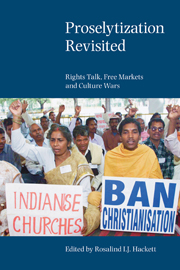 Seeing is More Than Believing: Posters and Proselytization in Nigeria

Religion, religious practices, and institutions play important roles in the private and public lives of Nigerians. The Nigerian Constitution provides the legal framework for freedom of religion and belief in the country. According to the Constitution,

Every person shall be entitled to freedom of thought, conscience and religion, including freedom to change his religion or belief, and freedom (either alone or in community with others, and in public or in private) to manifest and propagate his religion or belief in worship, teaching, practice and observance.

This legal provision is what Simeon Ilesanmi (2001, 540) calls the “the free exercise norm” by which individuals are in principle free to worship a divine being of their choice, change their religion and form religious associations with people of like minds. To a large extent, therefore, religion is unregulated by government, meaning that officially, the government does not support or adopt any religion as “state religion.” This provision is regarded as the “non-establishment norm.” These two norms may be taken to constitute a legal framework or basis for unrestricted religious enterprise as well as proselytism in Nigeria. In practice, however, this is not the case as government funds are used to subsidize pilgrimages to Mecca (for Muslims) and Jerusalem or Rome (for Christians). In addition, although Nigeria is a “non-secular” but religiously plural (some prefer the term “multi-religious”) country with three major religious traditions, (African traditional religions [ATR], Islam and Christianity), Islam and Christianity have gained ascendancy in the competition for power and status in the country, with these two receiving recognition in the armed forces and police, for example.