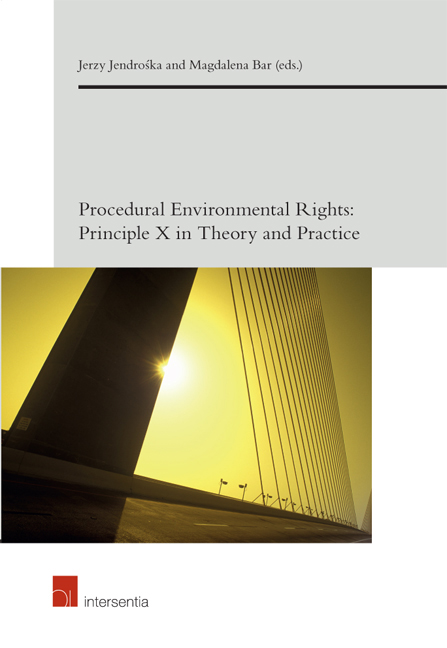 The importance of procedural environmental rights is currently widely recognised. They serve not only as a guarantee of the right to environment and a tool to increase participatory democracy and active involvement of the public in environmental protection but also as an effective instrument of monitoring compliance with – and enforcement of – environmental law. Following recognition of their importance, procedural environmental rights have increasingly been acknowledged in legal frameworks at the national, supranational and international level. The first comprehensive approach to procedural environmental rights at the international level was undertaken when access to information, public participation in decision making and access to justice in environmental matters were codified in Principle X of the Rio Declaration. Although the Rio Declaration belongs to the instruments of so called ‘soft law’ (i.e. having not binding legal nature but only a form of recommendations or political declarations) Principle X is commonly considered to be significant as a clear global expression of the developing concepts of the role of the public in relation to the environment. It was soon after its adoption acknowledged as an international benchmark against which the compatibility of national standards could be compared and as a forecast of the creation of new procedural rights which could be granted to individuals through international law and exercised at the national and possibly international level.

The binding international standard in relation to procedural environmental rights was set with the adoption in 1998 in the Danish city of Aarhus of the UNECE Convention on access to information, public participation in decision making and access to justice in environmental matters (Aarhus Convention). Since then a number of legal instruments regulating procedural environmental rights have been developed or are in the process of development at the national, supranational (regional) and international level.

The role of the Aarhus Convention for the development of procedural environmental rights is well acknowledged in the academic literature, It is described as “the first multinational environmental agreement that focuses exclusively on obligations of the nations to their citizens and nongovernmental organizations”, and the first binding international instrument attempting to comprehensively and exclusively address issues of citizens’ environmental rights. Furthermore, it is considered to be a “driving force for environmental democracy” in Europe, and “at the forefront” of developing the legal framework in this respect worldwide.