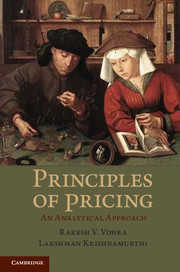 Auctions are a venerable selling institution, in use since the time of Herodotus. The word comes from the Latin auctus, meaning to increase. An obscure term for auction, one guaranteed to impress friends and neighbors, is the Latin word subhastare. It is the conjunction of sub, meaning “under,” and hasta, meaning “spear.” After a military victory, a Roman soldier would plant his spear in the ground to mark the location of his spoils. Later, he would put these goods up for sale by auction.

Perhaps the most engaging tale about auctions is the sale of the Roman Empire to the highest bidder. It is described in Edward Gibbon's account of the decline and fall of the same.

In 193 a.d. the Praetorian guard3 murdered the emperor Pertinax. Sulpicianus, father-in-law to Pertinax, offered the Praetorians 5,000 drachmas per guard to be emperor. Realizing they were onto a good thing, the guard announced that the empire was available for sale to the highest bidder. Didius Julianus outbid all comers and became emperor for the price of 6,250 drachmas per guard. The description by Gibbon is worth a read:

This infamous offer, the most insolent excess of military license, diffused an universal grief, shame, and indignation throughout the city. It reached at length the ears of Didius Julianus, a wealthy senator, who, regardless of the public calamities, was indulging himself in the luxury of the table. His wife and his daughter, his freedmen and his parasites, easily convinced him that he deserved the throne, and earnestly conjured him to embrace so fortunate an opportunity. […]