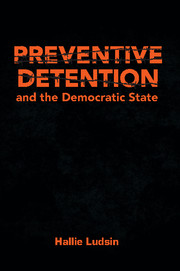 10 - Preventive Detention in the United States

Americans generally believe that the US Constitution prohibits detention without charge or conviction, except, perhaps, for foreigners detained as suspected terrorists in Guantanamo Bay. So strong is this belief that Klein and Wittes describe it as a “civic myth;” as “something of an article of faith … that preventive detention runs counter to American values and law.” Reality flies in the face of this civic myth. The federal government has the power to detain Americans and foreigners alike as suspected terrorists and the state and federal governments regularly use preventive detention against criminals. Perhaps the most surprising of all, like England, it is far easier to detain a criminal in the United States than it is to detain a suspected terrorist.

This chapter begins by describing the sources of law in the United States and the prohibition on arbitrary detention found in the Constitution's Due Process Clause. It then examines the historical limitation of preventive detention to periods of war or insurrection or for the mentally ill. Next, it describes the expansion of preventive detention beyond its traditional bounds. This section describes the rise of the risk society in the United States and the creation of new groups of deviant others who could be subject to detention. The chapter concludes with an analysis that the US is not so slowly removing previous barriers to preventive detention that had kept it as an extraordinary measure, placing it firmly on detention's slippery slope.

The sources of US law are the Constitution, statutory and common law and, to some extent, international humanitarian law (IHL). The Constitution applies fully to state and federal governments. Statutory law encompasses federal statutes as well as state statutes that apply only within the states’ separate jurisdiction. Jurisdiction over detention of suspected terrorists and enemy combatants is strictly federal. The Washington D.C. federal courts are tasked with determining the government's detention powers within the broad holdings of the US Supreme Court and under the laws of war, which include the Geneva Conventions and customary international law. The states have the power to use preventive detention during an insurrection within their territory if so granted under their state constitutions or laws.

Detention of criminals, which in the United States covers sexual offenders, is typically handled by the states although there are federal statutes as well.