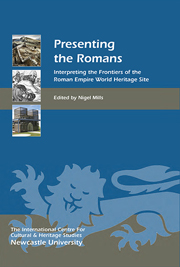 8 - An International View of Reconstruction

This chapter focuses on the issues surrounding reconstruction of UNESCO World Heritage properties, principally archaeological sites. It is written from the perspective of a national heritage body rather than from that of UNESCO itself, though the author has considerable experience of working with the UNESCO World Heritage Centre and the advisory bodies to the World Heritage Convention. The chapter attempts to interpret UNESCO guidance within the context of national policy and practice in the UK in particular, and of international guidance in general. Given the context in which it was originally delivered, as a paper at the 2009 Limes Congress, there is also a focus on the reconstruction of Roman military sites, which often appears to be a particular ambition of their managers.

The terminology in this field can be confusing, particularly since the same words are frequently given differing meanings by different practitioners. For the avoidance of doubt, and possibly in imitation of Humpty Dumpty, who said ‘When I use a word, it means just what I choose it to mean, neither more nor less’ (Carroll 1871), this chapter uses the definitions set out in the 2001 English Heritage statement on reconstruction of archaeological sites including ruins:

Restoration means returning the existing fabric of a place to a known earlier state by removing accretions or by reassembling existing components without the introduction of new material.

Re-creation means speculative creation of a presumed earlier state on the basis of surviving evidence from that place and other sites and on deductions drawn from that evidence, using new materials

Replication means the construction of a copy of a structure or building, usually on another site or nearby.