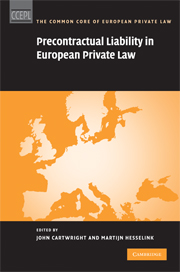 This volume is designed to form another piece in the jigsaw of the map of private law in Europe – a map which is being drawn, piece by piece, through the results of the various projects undertaken by the Common Core group.

This project was first conceived at the meeting of the Contracts sub-group of the Common Core group in Trento in 1996, although it took a number of years for the project to take shape. The work of our national reporters and other contributors, and our own editorial work to produce this volume, have therefore been carried out over a number of years. We describe the Common Core method, and the particular approach which we have taken to our own project, in the Introduction.

It seemed particularly appropriate for this project to be undertaken under the joint editorship of a Dutch lawyer and an English lawyer; not simply because this ensures that both the ‘civil law’ and the ‘common law’ are represented in the editorial team (this does not mean that we wish to reinforce the caricature of the so-called civil law/common law divide, on which we comment in the Conclusions) but because, of all the legal systems represented within our project, Dutch law and English law represent the extremes of principle. Amongst the ‘civil law’ systems, Dutch law is known for having a particularly strong view of the liability which one negotiating party may incur towards the other once the negotiations have reached an advanced stage, accepting that in principle this might even extend to remedies designed to compensate the innocent party for her failure to obtain the contract under negotiation.