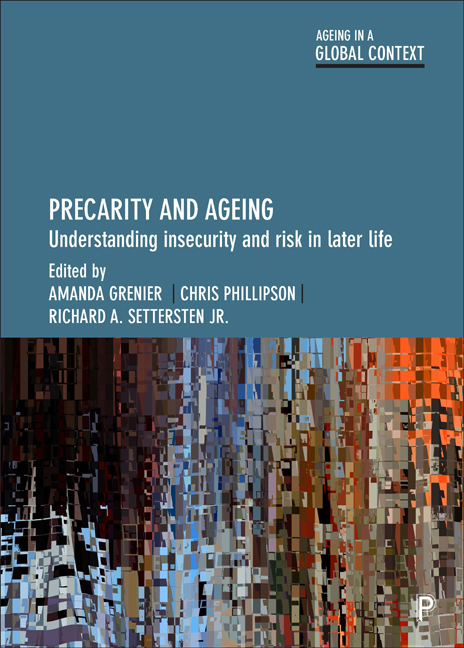 10 - Austerity and Precarity: Individual and Collective Agency in Later Life

Earlier chapters have reviewed the way in which the concept of precarity has been used to identify new forms of insecurity affecting the lives of older people. An underlying cause of the changes described arose from the financial crisis of 2008 and the implementation of public policies built around economic austerity (see further Tooze, 2018). The purpose of this chapter is to examine the impact of these developments and to assess potential areas of challenge and resistance on the part of older people. For many countries, the issues surrounding the growth of more precarious lives – at all points of the life course – has been embedded in a process – pre-and post-2008 – of marginalizing the language and narrative of the welfare state, alongside associated ideas of social inclusion and social security. Blackburn (2006, p 5) makes the point that an ageing society ‘requires new welfare principles not their repudiation’. However, the reality has been the gradual erosion of welfare support as well as the social solidarity that gave it legitimacy (McKibbin, 2017). Both aspects underline the extent of the crisis facing societies undergoing demographic change: in the case of Europe, one set of welfare institutions is being abandoned, with their replacement coming in the form of a precarious set of arrangements characterized by reduced state involvement, privatization of care and pensions, and greater responsibilities placed upon women for unpaid work within the home and community (Cooper and Whyte, 2017; Taylor-Gooby et al, 2017; Toynbee and Walker, 2017).

This chapter examines the context for the rise of precarity in the lives of older people, as well as responses and alternative areas of practice. The chapter is divided into five sections. First, it presents a discussion of the link between precarity and changes in the welfare state and austerity policies imposed by governments in the Global North. Second, it considers the impact of the decline of areas of social support and the emergence of what Streeck (2016) has termed an ‘under-institutionalized’ society. Third, the changes outlined are linked to the influence of neoliberal policies with their emphasis on personal responsibility for managing transitions through the life course.