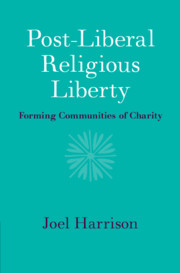 Religious liberty protects the quest for true religion. It facilitates the free creation of communities of solidarity, fraternity, and charity, or what we may call ‘right relationship’, seeking the truth about God and instantiating this in manifold contexts. This claim, developed in this book, is a response to a question: why should we care about religious liberty? What purpose does it serve within a just political community? In recent years, many commentators have argued that religious liberty fundamentally concerns personal autonomy. This fits with the state’s wider duty to promote equal concern and respect between different conceptions of the good or claims of authenticity. Courts have often followed in similar vein. Such a view both challenges treating religious liberty with any special concern, and questions the public role and life of religious traditions more generally. The Muslim woman’s headscarf or a Christian’s cross may be indistinguishable from other curtailed autonomy interests in the workplace. A community adopting a crucifix in civic contexts disrespects its non-conforming citizens. The religious organisation refusing to hire persons who do not adhere to its religious beliefs is suspiciously limiting the self-determination or autonomy interests of members of the public. Religion, according to this liberal egalitarian account of religious liberty and political authority, is both abstracted and perceived as a threat. Paradoxically, it becomes a capacious category of personal autonomy or authenticity, seemingly expanding to a general liberty for all persons, but at the same time it is increasingly subjected to state interests, especially when it runs contrary to the egalitarian ethos. Religion is both flattened out and contained in aid of a vision, ultimately, of ethical individualism.