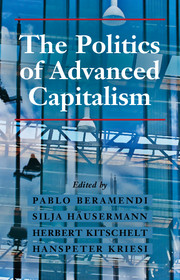 1 - Introduction: The Politics of Advanced Capitalism

In the concluding chapter of the 1999 volume Continuity and Change in Contemporary Capitalism, the then-editors affirmed that the most challenging part of the characterization of contemporary capitalism is to determine “how the cross-sectional patterns of variation, locked in through intricate pathways of industrialization and democratization, are shaped by growing global interdependence and domestic political and socioeconomic change” (Kitschelt et al. 1999: 427). Today, almost two decades later, the task at hand seems even more daunting, as advanced capitalism is caught up in an accelerating flux, induced by both external constraints as well as the internal dynamics of its political forces and institutional reforms.

In a process accelerated by the Great Recession, virtually every essential aspect of advanced political economies is undergoing fundamental, and potentially far-reaching, transformations. From the demographic tenets of society, through partisan loyalties or the organization of labor markets and economic institutions, to education, tax, and social protection systems, everything seems to be in a process of fundamental change and in need of either adaptation or radical reform. The cross-national variation in institutional arrangements seems to have shifted from frozen landscapes to a complex, hybrid, and morphing configuration of elements taken from different places and “models.” What were previously understood as stable and rather self-contained “models” of economic growth, distribution, and risk management are now giving way to unprecedented combinations across such models with unanticipated consequences for economic performance as much as individual citizens' life chances.

A full understanding of these processes requires revisiting existing accounts of the cross-national variation among advanced political economies. While the current reconfiguration may no longer conform to any of the models highlighted in the previous literature on the post–World War II past of today's most affluent democracies, and while current developments may even make us reconsider how these models need to be characterized in the first place, the stream of new evidence does not, however, warrant the conclusion that current transformations are either random or a signal of convergence on a single institutional equilibrium.