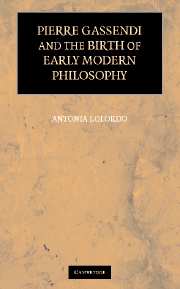 This book is both an interpretation of Gassendi's central metaphysical, epistemological, and natural philosophical views and an advertisement for their philosophical and historical interest. Historians of seventeenth-century philosophy can usually tell you that Gassendi was an atomist, an empiricist, or a mitigated skeptic, as well as an opponent of Aristotle and Descartes. They might add that he attempted to revive Epicureanism. However, few are likely to have any clear conception of the theses Gassendi articulates, the arguments he offers in their defense, or the systematic connections between them. This is an unfortunate situation, and I aim to remedy it.

There are at least two reasons why those of us who are interested in early modern philosophy and natural philosophy need to know more about Gassendi. The first is widely recognized. Gassendi's influence and the importance he was accorded by his peers and close contemporaries is unquestionable. Gassendi was a central figure in seventeenth-century philosophy and, as such, very important for the development of modern philosophical thought. He knew and was known by such figures as Descartes and Hobbes and is important for understanding Leibniz, Locke, and Newton. Were one a seventeenth-century intellectual who found Cartesianism unacceptable, Gassendi's philosophy was the obvious alternative.

Less well known, however, is the philosophical interest of Gassendi's system. Gassendi attempts to solve central problems besetting causal theories of perception; distinguishes perceptual from nonperceptual cognition in a way that idea theorists typically failed to do; argues for an explicitly antireductionist version of the mechanical philosophy; presents a radical account of the source of creaturely activity; and more.