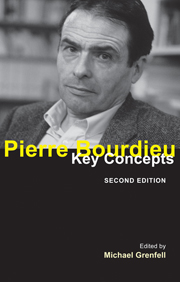 Preface to the second edition

The second edition of this book has afforded us the opportunity to review, revise and extend our coverage of the work of Pierre Bourdieu. Each chapter has been reconsidered by the contributing authors with a view to bringing the bibliography up to date, developing discussion and clarifying points from the first edition. However, we have also added an entire new part entitled “Applications”. Having completed the first edition of the book, I felt there was a need to include something about actually using these concepts in practice, which I then did in the form of a postscript on methodological principles. Here, I set out a framework for conducting research from a Bourdieusian perspective in terms of key elements to be adopted by the would-be researcher. This postscript has now been extended to an entire chapter, which is complemented by two other chapters on “Social Space” and “Politics”. The first of these develops methodological concerns when constructing and representing social contexts, and offers examples and guidance on how to think of space in these terms. The chapter on politics reminds us of the radical intent behind much of Bourdieu's work, and considers the way these ideas may impact in the political arena and society at large.

A new edition also allows us to respond to our critics. On the whole, the book has been well received by reviewers, and it has been popular among researchers and students interested in working with Bourdieu. From the outset, I knew that to deal with each concept one by one was a hazardous project. In much of my own writing, I insisted that all of the concepts had to be viewed in an integrated form, not cut up and used discretely on their own. Nevertheless, I did feel there was something to be gained by taking each one by one and, in a way, looking at the others through that individual lens. Some reviewers have been keen to point out the dangers of such an enterprise. For one, even to talk about subjectivity and objectivity was tacitly to approve a dichotomy that would be divisive.