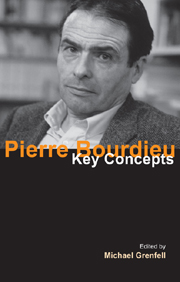 PART I - BIOGRAPHY, THEORY AND PRACTICE

Introduction to Part I

Part I of this book is entitled “Biography, theory and practice” and it comprises two chapters which span these three principal strands in Bourdieu's work. Chapter 1 begins with a brief outline of Bourdieu's life and works and this sets a framework for what follows in the rest of the book. It is emphasized how important it is to read Bourdieu's ideas firstly in terms of the current practical problems and issues of the day before any contemporary use is made of them. A sketch is subsequently offered of the events which surrounded Bourdieu's life and impacted on his thinking. This account includes the social, cultural, historical, political and economic. Bourdieu was active professionally for almost exactly the fifty years of the second half of the twentieth century and this section details some of the salient trends in this time period; in particular, with respect to France. In the next section of this chapter, Bourdieu is located within the intellectual tradition to which he formed a part. This tradition is linked to the eighteenth century Age of Enlightenment and the French philosophes which were its key thinkers. As noted, Bourdieu originally trained in philosophy before embracing sociology as the focus for his writing. The section “Bourdieu and the intellectual tradition” begins to unpick the various strands in his theory of practice, with reference to the founding fathers of sociology – Karl Marx, Emile Durkheim and Max Weber – French Catholic intellectuals of the 1930s and 1940s, the European tradition of phenomenology, and the leading intellectual figures of his formative years, namely, Jean-Paul Sartre and Claude Lévi-Strauss.