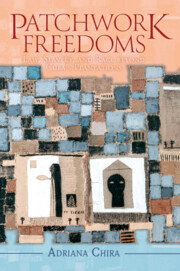 Throughout the nineteenth century, in rural peripheral communities located in the shadows of intensive extraction zones in Latin America, people of African descent forged patchwork freedoms, piece by piece, via the judicial system, for decades and even centuries before broad laws of emancipation were enacted in the nineteenth century. Through this piecemeal process, in regions such as Santiago de Cuba, demographically significant populations of free Afro-descendants gradually emerged through for-purchase manumission. Because purchasing manumission consisted of payments in cash or services made gradually and in installments, many people who sought freedom through this process remained caught between full legal slavery and full legal freedom for years – if not a lifetime. In their efforts to manage their claims, local courts often deferred to communities and their customs for insights into the rights that such individuals deserved. Many people pushed for unexpected prerogatives, claims that gradually undermined the authority of enslavers, while at the same time they called for state support. Sometimes using threats of insurgency and fugitiveness, people seeking freedom through manumission elicited rights from the state in the name of equity and prudence, and therefore unmoored slave and color status from birth status. In places such as Santiago, the outcome was a gradual model of emancipation from below that preceded liberal-nationalist laws of freedom. The meaning of freedom was not abstract; rather, it emerged out of rights negotiated with local authorities, such as the courts, municipal councils, and governors. It was also a model of freedom that depended on staying put, rather than on moving along circum-Caribbean or trans-Atlantic networks. One needed witnesses who could vouch for one’s reputation and behavior. One had to be known and to be bound to a community to succeed. Such ties and their custom-based roots yielded a sense of belonging and of local legal autonomy for people living in the province of Santiago. In the second half of the nineteenth century, this autonomy took overt political expression, fueling key elements of the insurgency in Cuba’s independence wars.