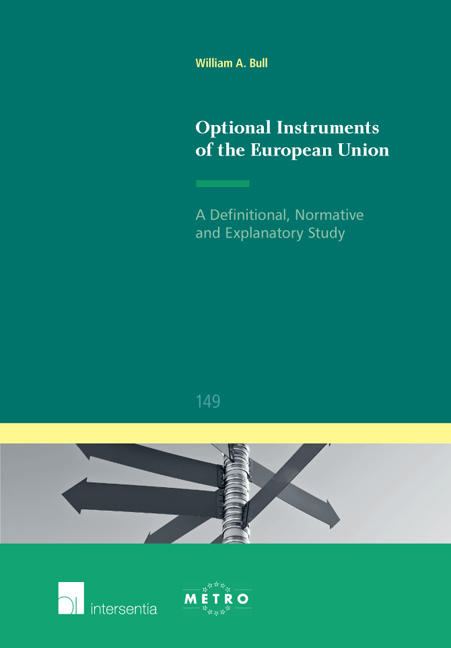 Optional Instruments of the European Union
A Definitional, Normative and Explanatory Study
Buy print or eBook[Opens in a new window]

from Part 2 - Eu Optional Instruments: A Normative And Explanatory Framework

The possibility of grouping and comparing distinct pieces of EU legislation applicable in diverse fields of law under a single heading on the basis that they are all birds of a particular legislative feather is an appealing one, for it can lead to a whole host of intriguing observations and questions.

First and foremost, the aggregation of various existing and proposed Regulations in the areas of company law, intellectual property law, contract law and procedural law (not to mention others) according to an elemental definition of ‘optional instrument’ supports the finding of a certain trend arising in European Union legislation. That is, it may be observed that the EU legislator is increasingly looking to such ‘optional instruments’ as an alternative way of regulating various areas of (private) law that fall under its competence. In turn, this growing reliance of the EU legislator on OIs begs the question whether this tendency is to be welcomed; or, in more concrete terms, whether this alternative legislative approach is desirable, and for what reasons? Clearly this question can itself give rise to various others, depending on the considerations one might deem relevant in this regard, not to mention the perspective one takes. What are the motivations behind the shift towards OIs in the European Union, and is the reasoning of the European legislator well-founded? More generally, what are the arguments in favour of and against OIs as a method of EU lawmaking? Are OIs a better means of attaining the legislator's goals than other methods available to it and, in particular, is the OI-based approach preferable to that of similarization in achieving the EU's objectives in the different fields of European law? Is the effectiveness of OIs in reaching their stated aims dependent on their being selected by a sufficient number of private individuals on a sufficiently consistent basis? Even though OIs apparently leave national laws unmodified, do/can they still have a converging effect in the relevant field of law at national level? That is, can EU legislation creating OIs still lead to legal convergence in some other way? And if so, to what extent is this (also) dependent on the instrument being chosen by natural and legal persons? What does the optional instrument method mean for the EU Member States and private actors?