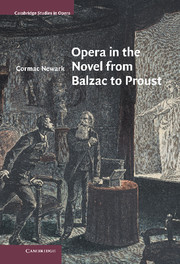 4 - Knowing what happens next: opera in Verne

Emma Bovary may be the most famous spectator of the soirée à l'Opéra tradition, but when judged against some of its established conventions she is far from typical. The distinction can be summed up simply: she does not know how the music goes. Nevertheless her experience has a compelling musical teleology – structuring extended periods of depicted time, requiring a technical descriptive language that here and there makes the plot-narrative bulge uncharacteristically – that figures only momentarily in that of Monte-Cristo or his fellow audience-members. When the count hushes his companion because Duprez is about to sing a favourite line, he draws attention not so much to the progress of the music but rather to how little it has impinged on that of the dialogue up until that point; he also demonstrates that, for all his insistence on ignorance of Parisian society, in his knowledge of a particular operatic repertoire he is a bona fide part of it – and yet, in his interrupting a conversation to listen, irredeemably a foreigner.

Emma's rapt attentiveness is in this sense further expression (if any were needed, more than two-thirds of the way through the novel) of her not fitting in: the whole scene is out of keeping with its literary equivalents set in Paris, which are mainly predicated on regularity of attendance and sophisticated ignoring of the on-stage action (Flaubert's subtitle is, of course, Mœurs de province), but she is not like the other patrons of the Rouen opera house either, who are habitués and therefore depicted very much at their ease.