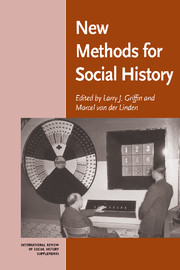 Incorporating Space into Social Histories: How Spatial Processes Operate and How We Observe Them

Social historians study social, political, demographic and economic phenomena which take place in geographical space, yet “space” rarely enters historical discourse explicitly as an analytic construct. Given the recent interest among social historians in “localizing” social processes, it is unfortunate that almost all of our efforts have gone toward recognizing the significance of time, to the relative neglect of space. For example, social historians typically assume that events occurring at a given point in time are affected by earlier events. In contrast, it is less widely recognized that events occurring in one location are also affected by similar events in other areas, especially those nearby. In the rare instances in which geographical space has been central, such as in Susan Watkins’ treatment of western European fertility decline during the late nineteenth and early twentieth centuries, or in the evidence of the diffusion of democracy in post-war Europe that is emerging from the “Spatial and Temporal Diffusion of Democracy” project at the University of Colorado – Boulder, the payoff has been substantial. Such innovative approaches to historical theorizing give reason to believe that thinking of events in the past as parts of a process moving through time and across space will become more commonplace. If so, then social historians will need an effective and accessible method to account for the spatial distributions of their study phenomena.

Spatial patterning in a dependent variable (e.g. a concentration of events in a few neighboring areas) may not be, in itself, of much interest to social historians. Clearly there is a tendency for nearby, especially contiguous, areal units to share many of the same social, demographic, economic and cultural characteristics.