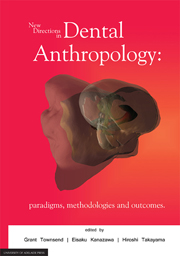 6 - Dental crown and arch size in Europeans and Australian Aboriginals

Various methods have been used to measure human dental crown and arch size as a means of examining population affinities and differences. Traditionally, this has been done using hand-held calipers, however, new technology such as two dimensional and three dimensional imaging now provide alternatives for researchers. Here, we report the findings of a study to validate two new imaging techniques (2D and 3D) and to quantify differences in the dentitions of several human populations for whom dental records are available. 2D photographic imaging using a digital SLR (Canon Inc, Tokyo, Japan), and 3D laser scanning with an Optix 400S 3D laser scanner (3D DigitalCorp, Connecticut, USA) were utilized. Measurements of dental crown variables, including mesiodistal and buccolingual dimensions and interarch widths, were explored statistically. Data extracted using both 2D and 3D techniques were compared to assess the precision and accuracy of the two methods. Both 2D and 3D techniques displayed high levels of precision and accuracy, and highlighted statistically significant differences in dental crown size and arch size within and between the study populations. The methods developed offer considerable promise for the field of forensic odontology, including distinguishing individuals within populations on the basis of their dentitions.

Many dental anthropologists have focused on non-metric traits to characterise major population groups (Hanihara, 1967; Scott and Turner, 1997), and various ‘dental complexes’ have been identified, including Mongoloid, Caucasoid, Negroid and Australoid (Turner, 1990; Townsend et al., 1990; Mayhall et al., 1999). In conjunction with non-metric traits, there have also been numerous metric studies of the dentitions of human populations (Hanihara, 1998; Falk and Corruccini, 1982; Kieser, 1991; Hanihara and Ishida, 2005). Based on these studies, populations have been grouped as microdontic, mesodontic, and megadontic (Hanihara and Ishida, 2005). Some researchers have claimed that non-metric qualitative characteristics are more useful than continuously variable quantitative characteristics in grouping people according to their geographic location and affinities (Lasker and Lee, 1957; Hanihara, 2008). Measurements of dental crown size and arch size, however, provide greater objectivity than scoring of traits. A combination of metric and non-metric features is likely to provide the most comprehensive and discriminatory description of human dentitions.